How Life Amplified came to be 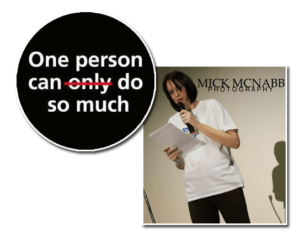 Since 2010, Deb Kelley has been a freelance reporter for AOL Patch interviewing people making an impact on the community. For three years, she had listened to incredible stories from women like Carissa Caricato, founder of Hoola for Happiness; Connie Rose, Victims2Survivors; Natasha Nascimento, Redefining Refuge, Kellie Lightbourn, Teen Edge and Be-You-Ty Camp for Girls, and Kim Kenney, Secret Tampa Cash Mob and Carrollwood Northdale Area Community Organization. These women saw an opportunity to make a difference and did so. No hesitation. No but, I’m only one person – what can I do – excuses.

Kelley felt inspired to join the ranks of these women making a positive difference in the community. Though she regularly donated design services to local schools and nonprofits, especially those that focus on human rights, social injustice, bully prevention, and the creative arts- she wanted to make a larger impact.

After completing an interview with Tampa Pitcher Show owners in 2012, she asked if they ever considered a spoken word showcase at the venue. She was advised that with the venue’s busy schedule, though they would love to do a show, there was no one to organize.

Though Kelley has written, produced and emceed charity and retail fashion shows, as well as produced TownNCountry’s Got Talent, she had no experience in hosting a poetry showcase – other than a love for spoken word poetry. However, Kelley decided to try her hand at a Spoken Word showcase. She called it Life Amplified, donating part of the proceeds to a selected local nonprofit.

Though registration was slow at first, the event began to build momentum and other performers -not spoken word poets- asked to perform. After a successful debut in January 2013, Kelley decided to make the showcase a regular event – keeping the name Life Amplified and choosing a timely platform/theme and worthy charity to receive a portion of the proceeds of each event.

The inaugural show opened with 2 singers, 9 poets, a comedian/impressionist and a mind-reader. The platform was human trafficking awareness. Kelley has since opened the showcase to all forms of performance art.

Her third showcase Life Amplified SALUTES featured Nine and Numb and 20 performances that honored American Veterans and fundraised for K-9s for Veterans, raising nearly $500. The first show of 2014, Life Amplified METAMORPHOSIS raised over $100 for the Crisis Center of Tampa, Take Back the Night.

Life Amplified KIDZHELPINGKIDZ was on May 3rd at a new venue, Carrollwood Players benefiting Bricks for the Brave (formerly Legos for Leukemia). It featured a child emceed and all children variety acts. Life Amplified KIDZHELPINGKIDZ was especially poignant as Kelley was recognized as Fox TV’s Hometown Hero for her charity work and sold out my first event at the new venue where it was standing room only.

Life Amplified EMPOWERS took on Military Sexual Trauma (MST) and raised over $650 for EQUUSOLUTIONS who uses equine therapy for survivors of PTSD and MST. Eighteen performers from the inaugural showcase, as well as new poets, a beat boxer, cellist, and a band took to the stage at Carrollwood Players for this worthy cause. Days later the charity called and excitedly said that a horse was also donated.

Life Amplified MASQUERADE, adopted as an annual event at the nonprofit Carrollwood Players Theatre, combined comedy, improv and old-fashioned burlesque to raise nearly $400 for the venue.

Life Amplified SADDLE UP helped bring voice to a horse rescue that worked with disabled children and adults, Casey’s Healing Hooves, raising nearly $400 for the nonprofit.

Life Amplified CAFFEINATED reached out to help a local  Tampa community landmark for 19 years, Sacred Ground Coffee House, an inclusive coffee house and exciting new, original music venue that is committed in providing a safe, friendly, positive community environment for all who have an open mind and are accepting of all ways of life. Kelley  was recognized as Bay News 9’s Every Day Hero for her volunteer work in the community with Life Amplified.